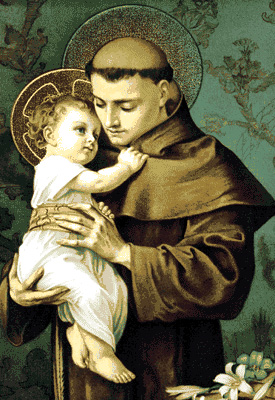 Saint Anthony of Padua, was born Fernando Martins in Lisbon, Portugal on August 15, 1195. At the age of fifteen, he entered the community of Canons Regular at the Augustinian Abbey of Saint Vincent near Lisbon. In 1212, distracted by frequent visits from family and friends, he asked to be transferred to the Abbey of Santa Cruz in Coimbra. After his ordination to the priesthood, Fernando was placed in charge of hospitality for the abbey. While he was in Coimbra, some Franciscan friars arrived and settled at a small hermitage outside Coimbra. Fernando was strongly attracted to the simple, evangelical lifestyle of the friars, whose order had been founded only eleven years prior. News arrived that five Franciscans had been martyred in Morocco, the first of their order to be killed. Inspired by their example, Fernando obtained permission from church authorities to leave the Canons Regular to join the new Franciscan Order. Upon his admission to the life of the friars, he joined the small hermitage in Olivais, adopting the name Anthony (from the name of the chapel located there, dedicated to Saint Anthony the Great), by which he was to be known.

In 1222, in the town of Forli, at an ordination, there was a misunderstanding over who should preach. The Franciscans expected that one of the Dominicans present would preach the homily, for they were known for their preaching. However, the Dominicans, had come unprepared, thinking that a Franciscan would do it. In this quandary, the head of the hermitage, called upon Anthony, whom he suspected was most qualified, and ordered him to speak against his objections, whatever the Holy Spirit should put into his mouth. His sermon created a deep impression. Not only his rich voice and arresting manner, but the entire theme and substance of his words and his moving eloquence, held the attention of his audience. Everyone was impressed with his knowledge of Scripture, acquired during his years as an Augustinian friar.

Anthony soon came to the attention of the founder of the order, Francis of Assisi. Francis had held a strong distrust of the place of theological studies in the life of his brotherhood, fearing that it might lead to an abandonment of their commitment to a life of real poverty. In Anthony, however, he found a kindred spirit for his vision, who was also able to provide the teaching needed. In 1224, Francis entrusted the pursuit of studies for any of his friars to the care of Anthony.

Anthony became sick with ergotism, a disease which is now known also under the name “Saint Anthony’s Fire”. Anthony died on the way back to Padua on 13 June 1231 at the Poor Clare monastery at Arcella at the age of 35.

Anthony was canonized by Pope Gregory IX on 30 May 1232, at Spoleto, Italy, less than one year after his death. He was the second-most-quickly canonized saint after Peter of Verona.

Noted by his contemporaries for his forceful preaching and expert knowledge of scripture, he was proclaimed a Doctor of the Church on 16 January 1946 by Venerable Pope Pius XII, attributing to him the title Doctor Evangelicus.

He is also the patron saint of finding things or lost people.